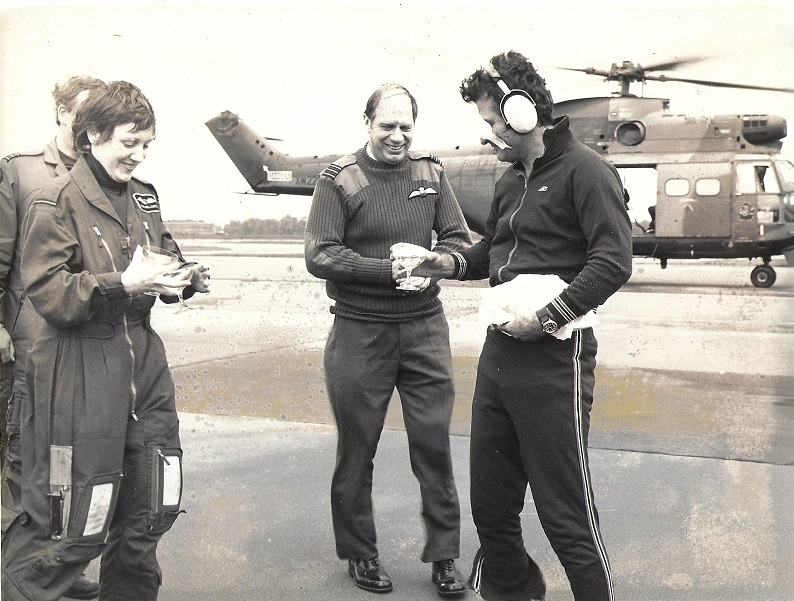 3rd May 1983 was an interesting day. The Harrier Force was deployed in the field for TACEVAL. On our first launch, just as I was nozzling aft, the engine noise stopped, most warning lights came on and when the view out the front changed from blue sky to green field I ejected. It was estimated that I pulled the handle at 180 feet. Certainly the parachute descent did not last long. I was lying in a field of young corn wondering what had happened when I heard a tracked armoured vehicle coming towards me at speed. I decided to show myself to the oncoming RAF Regiment crew before they ran me over. An injured knee ligament, sack of potatoes landing, kept me off flying for three months but hey I was alive thanks to Martin Baker. I still have the letter I got from D J Burrell, Managing Director telling me, among other things, that mine was the 5046th such escape. The photo shows my arrival back at RAF Gutersloh in a tracksuit given me by RAF Hospital Wegberg after they had taken all my flying clothing for examination. The BoI lasted some time as, because we were on TACEVAL, I was carrying a sheet of classified code which disappeared from my knee pad during the ejection. The champagne tasted good!