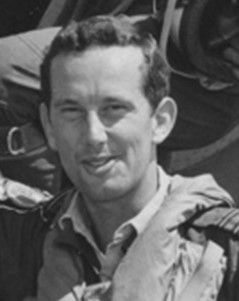 I ejected from my Harrier GR Mk 1 on 9 July 1973 whilst doing a short take off at RAF Wildenwrath in Germany. I had just got airborne at 90kts when I suffered multiple bird strikes of Lapwings many of which went down the engine. I tried to abort the take off and land straight ahead on the runway but attempts to maintain control in pitch and roll was becoming impossible. I decided to eject as the aircraft was rolling rapidly to the left at a height I believe of 80ft, 80 degrees of bank and also pitch and I believe at 80kts. My parachute, assisted by the rocket seat, opened as my feet hit the ground. Apart from a broken rib and slightly crushed vertebra I was back to flying a few weeks later.

I would not be here today had it not been for the wonderful design of the Martin Baker Rocket assisted Ejection seat. I remember the incident clearly to this day even to my feelings during the very short and smooth ejection sequence when I wondered why I had such a heavy weight in my hands – I was still hanging on to the ejection seat handle which was attached to the seat!! I let go and then hit the ground in a crumpled heap.

I heard afterwards that the local controller in the tower saw my Harrier pointing alarmingly close at him. He initiated the crash alarm but only managed part of it since he was legging it down the stairs when the cord to his microphone broke.

The station armourers later on made me a nice plaque on which they attached the ejection seat handle (very useful on my desk to keep the day’s mail) plus the ejection gun sear and the barostat release sear. These two latter items I keep as a talisman on my car key chain.

So thank you again Martin Baker.