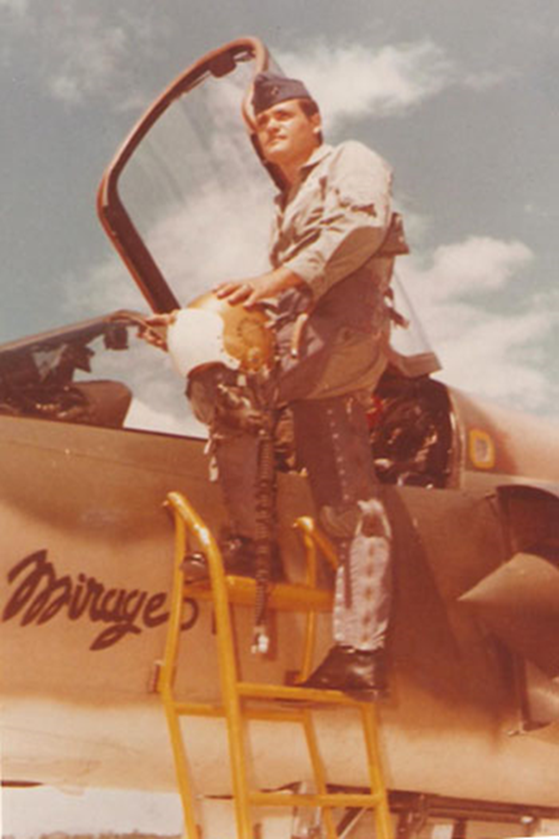 This was in the Mirage M5-DV aircraft, acronym FAV-5471, in which, coincidentally, I made my first flight in Mirage aircraft, as a pilot-student, holding the rank of Lieutenant, in August 1973, in company of my instructor, the then Tcnel. Rafael Quintero Torres “TORO”. I flew many hours on this plane during my many privileged years as a Mirage pilot; but for reasons and coincidences of life, in this same plane Mirage 5DV – 5471 I also made my last flight, 17 years later, when with the rank of Colonel, being an instructor pilot of Mirage aircraft and enjoying the honor of serving as Commander of the glorious and unique HUNTING GROUP N * 11, the always remembered “DEVILS” of the Venezuelan Military Aviation, made the vital decision to eject at the head of Runway 27, El Libertador Air Base, after the plane collided with the antennas of the ILS Headend System, and, as a consequence of the impact, the cables of said antenna detached and wound themselves around the wings, around the elevons, locking in effect, the flight controls of the plane.

Expanding a bit on the historical information of the flight mission during which this accident occurred, we can, in summary, report the following: Major David Isea Monagas, “TAMARE”, who was my first student in Mirage aircraft, an excellent instructor pilot of these aircraft and extraordinary Venezuelan Test Pilot, formed by the Chilean Air Force, had the task of instructing the Captain and pilot-student Blanco Astudillo (RIP), who had just been assigned to the Gruponce; but after the last hour of instruction (the seventh) had been flown in the pre-solo phase, Instructor Isea Monagas did not have the confidence in his student Blanco Astudillo, to release him alone, and, he asked me, that I give him an hour extra flight instruction to the aforementioned student pilot. Captain Blanco Astudillo had difficulties to safely operate and control the Mirage aircraft during the landing maneuver, and, as a consequence of these difficulties and during the third landing attempt on BAEL Runway 27, the aircraft critically sank during the turn. at the end, colliding with the antenna of the ILS System, as already mentioned.

Immediately, upon detecting that the flight controls of the plane were inoperative (locked), I ordered the start of the ejection process at a very low altitude (perhaps about 5 or 10 meters high), with the result that between Header 27 and the first Hangar of the Maintenance Service (an extremely short distance), the chair of the instructor pilot, the instructor pilot, the student-pilot chair, the student pilot and the Mirage aircraft impacted the earth in this undesirable and regrettable way. the end of the existence of that plane M-5DV FAV-5471 that for 17 years taught us so much, and that gave us so many emotions and satisfactions, ending on Monday May 14, 1990, as well as my life as an active pilot of MIRAGE AIRCRAFT.