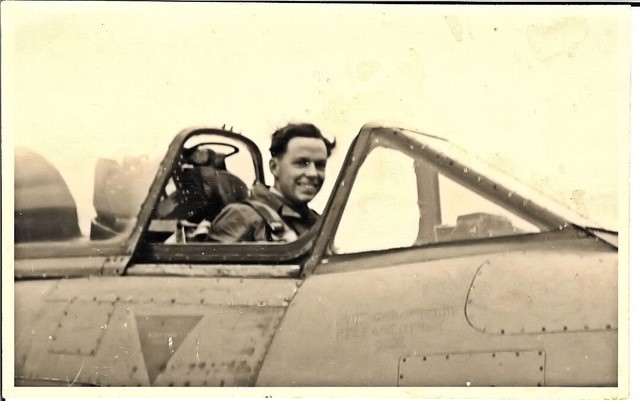 On the 67th anniversary of my ejection and having reached my 91st birthday, I thought it was about time, on behalf of my wife, children, grandchildren and great grandchildren, that I expressed my thanks to the Martin-Baker Company for saving my life all those years ago. As you can see, much has happened since then. The service you have provided for so long for so many has been of historic significance. Many congratulations to a fine Company.

On the 10th of June, 1954, I was leading a pair of Meteor PR 10s from Tunis to Istres in the south of France when my number 2 collided with my aircraft from behind at an altitude of 30,000 feet.  Our position was 90 miles west of Sardinia.  . The PR 10 had forward facing as well as vertical cameras. Unfortunately, he got too close and crashed into my tail breaking it off with most of of my rear fuselage.

The aircraft was fitted with a Martin Baker Mark 1E ejector seat. I had to manually release the seat harness and clear the seat which would normally be fairly straightforward aided by the seat drogue stabilising the seat on its descent.  Unfortunately, the seat drogue line was thought to have snagged the canopy release mechanism during canopy ejection so there was no seat stabilisation and I seemed to be on my back, gyrating wildly as I sought to operate the ejector seat harness release.

I eventually did so although my gyrations continued.  I then had to operate my parachute D ring which presented a further problem as it had slipped behind my back due to not having sufficiently tightened my harness at the start of the flight and the previous gyrations. I eventually managed it and then – silence – as my parachute canopy deployed.  I remember looking down and seeing, well below me, a tiny aircraft looking like a small toy spinning and splashing into the sea.

As I approached the sea surface I had difficulty in releasing my parachute harness and this resulted in becoming entangled in the parachute lines as I dragged the parachute under the surface with me.  I slowly disentangled myself from the lines and operated my K type dinghy.

About half an hour later, an aircraft flew at a low level directly over me.  I waved and it disappeared into the distance.  I had not been prepared for the rescue effort to start so soon or appreciated how difficult it was to see a small dinghy in a vast expanse of water.  About 8 hours later when I was beginning to prepare myself for night survival, an Italian aircraft appeared some way away but this time I didn’t hesitate.  I fired a 2 two star red and the aircraft immediately turned towards me.  It circled over me and I knew I had been spotted.  Later, I was picked up by a French passenger ship, the Commandant Quere.  The ship continued its journey to Bizerta, near Tunis, so I was back where I started.  The British Consul and his family kindly looked after me for 3 weeks.   It took me over a month to get back to my Squadron in Germany via the Air Ministry.

So what happened to my colleague who struck me? While I was attempting to escape from my aircraft, he circled around and transmitted emergency messages.  He did not see me eject and assumed I had crashed with the aircraft.  He was able to continue to Istres in the South of France where he was to discover why his aircraft was behaving strangely.  My tail fin was lodged in the rear of his fuselage and the two tails were connected to the rest of his aircraft by the aircraft skin alone.  The Gloster Aircraft Company made strong aircraft!  Fortunately for him, our Squadron Commander in Germany sent a Meteor from Gutersloh to Istres to confiscate the camera film.  It was developed and printed back at base and I was later quietly passed a copy of the last photo taken below. 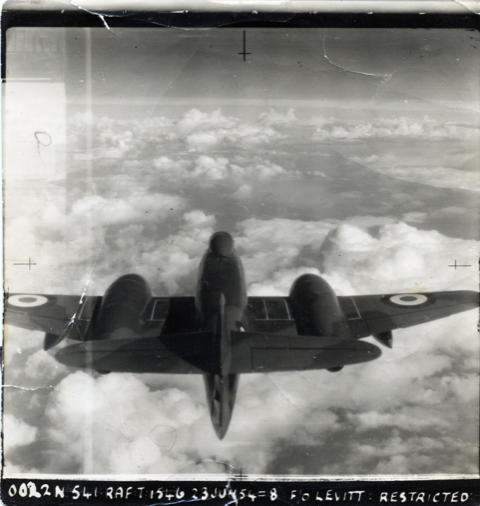