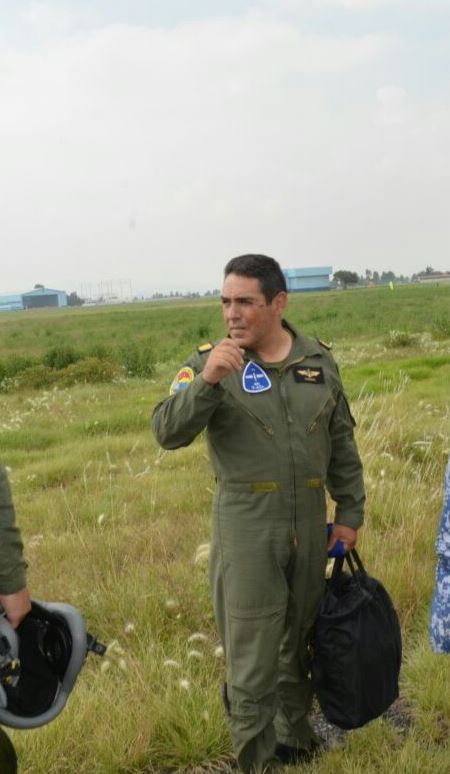 I send you a cordial greeting and I wish you are well.

I share my experience using a Martin-Baker ejection seat.

We were on August 16, 2017, at approximately 11:00 a.m., practicing for the seventh air show at the Military Air Base number 1 of the Mexican Air Force, in Santa Lucia Mexico, manning and leading a squadron of four T-6C+ aircraft.

Our squadron would perform some formation and display aerobatic maneuvers, including a sequence of crossings with two aircraft, which was in which the left wings of both aircraft collided during the third crossing.

We entered from the rear and on both sides of the presidium at 240 KIAS and 500 ft. height to make the first crossing with wings level and a 90 degree difference in course between aircraft, immediately turning both aircraft to make a second crossing turning with 60 degrees of bank in front of the presidium, continuing the turn to make a third crossing with wings level and with a 90 degree course difference after completing the 270 degree initial course change of the first crossing, to exit from the back of the presidium.

After we made the second crossing, my element entered the turbulent wake left by my aircraft, losing effectiveness in the controls and descending (finding ourselves 500 feet above the ground), a critical situation that forced him to turn his eyes towards the HUD to recover the aircraft’s attitude, since the natural horizon could not be distinguished as a reference due to the poor visibility (approximately 1 mile), momentarily losing visual contact with the leader, which he recovered when we were on a collision course.

The elements that contributed to the loss of visual contact were the scarce horizontal visibility prevailing in the area, the gray camouflaged color of the planes and that the maneuver was carried out by releasing white smoke, the exit nozzle being found in the exhaust on the right side of the plane, side of the leader who had the element in sight.

To complete the 270 degree change of direction with the turn and head straight for the center of the presidium, I turned my eyes to the left side (to the presidium) to level wings and make the third crossing.

As I level my wings and look back at the HUD and slightly to the right to look for my element, I realize that we are very close, almost head-on and on a collision course, immediately pulling the control stick to avoid the crash, this being impossible and colliding the left wings of both planes.

After the impact, the plane was out of control (loose stick) and began to turn making aileron roll to the left losing altitude, I tried to control the turn with the right rudder pedal fully down and proceeded to eject when we saw more clarity over the cockpit, because we did not have the reference of the natural horizon due to the reduced visibility and the jet fuel that enveloped the cockpit after the collision.

Our plane and we fell within the perimeter of the air base, without anyone being injured on the ground and fortunately with no damage to the facilities, in the same way the crew of the other aircraft (pilot and co-pilot) managed to eject without any serious injury.

Thanks to the excellent design and operation of the ejection system, we are alive and also without any permanent injury. I thank each and every one of that great work team that is Martin-Baker, for making it possible for us to share our experience by having saved our lives.