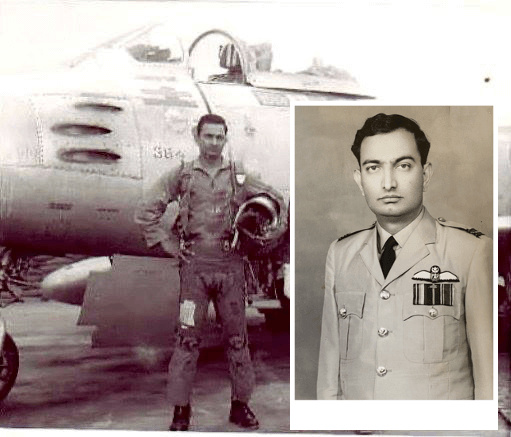 Post-1965 Pakistan-India war I was posted to No 17 Squadron at Pakistan Air Force base Mauripur in Karachi. The squadron was equipped with Canadair Sabre 6 (a variant of the North American Aviation’s F-86).  Early one morning in December of 1966, I took off for a ‘target towing’ mission to give live-fire practice to the Pakistan Army Artillery units at the Korangi Firing range. It was a routine mission, but as I turned around for my final run, I heard a crunching noise, and the engine came to a grinding halt. My first instinct was that it was a flameout.  I was over Clifton Beach at this point, and I estimated I had about ten seconds or less to make a decision. Land on the beach or eject? By this time, I was descending through 1000 feet. I attempted an unsuccessful emergency relight, and quickly realized that it was not a flameout but an engine seizure. Rejected the belly landing idea, gave a Mayday call, and at 500 feet ejected and safely landing about 1000 yards from the water.

The pick up by rescue helicopter was reasonably fast due to the Mayday call. And my recovery was even quicker, I was back in the cockpit after three days of rest.

I was fortunate that my aircraft had recently been equipped with a Martin-Baker ejection seat, and I continued a rewarding career with the PAF that lasted 33 years. On that December morning in 1966, I became the first MB ejection in the Pakistan Air Force.